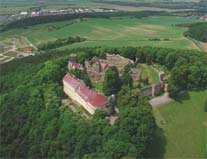 The Klenová District Gallery was set up in 1963. A local painter, Vladimír Levora, was named its first director. The opening of the desolated castle and chateau to the public is one of his first achievements. The gallery started to build up its own collection. In the first years of the gallery's existence it mainly exhibited Czech art of the 19th century which it borrowed from the National Gallery and the West Bohemian Gallery in Plzeň.

In 1973 the gallery lost its independence and became part of the District Museum in Klatovy. Its exhibition and acquisitions policy was very limited; the gallery also lacked expert staff. Nevertheless, there were some encouraging achievements in the history of the gallery that are worth mentioning. One of them was the famed exhibition of Maxmilián Pirner in 1979, as well as the opening of the permanent collection of Vilma Vrbová-Kotrbová and her husband restorer František Kotrba in the villa bellow the castle. (1976, in 1989 it was closed down) It is also necessary to mention the substantial purchases of work by artists of the then middle generation (1987, 1988), which were unrivalled in both extent and quality in the Czechoslovakia of the time. This deed foreshadowed the gallery´s operations after 1989.

The gallery's current form is a direct outcome of the revolutionary events in November 1989. The ground floor of No. 149/I on Klatovy Square, previously home to an historical exhibition on the workers' movement, was successfuly "taken over" and an exhibition of photographs of the Velvet Revolution was organised there. The following exhibition was set up in the same spirit, it presented photographs from the 1968 Soviet occupation. Subsequently, further events of a purely artistic kind were held there, and so it was decided that the exhibition activities on the premises should be granted official status. The best solution turned out to be a merger with the gallery at Klenová Chateau, which was at that time part of the District Museum. An independent gallery with a new name, Galerie Klatovy - Klenová was created and it was set up by the Ministry of Culture. 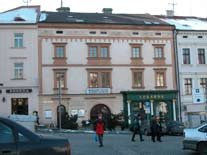 One of the first tasks of the new managment was to fight against the gradual decay of the chateau, where dry rot was found, and to preserve the castle ruins. The latter is almost constant work, and has been carried out since the 60s to today. Also the Gallery at the White Unicorn in Klatovy underwent adaptation. At first the exhibitions were only carried out on the ground and first floors, later the basement with interesting cellars was adapted and the second floor was opened in 1992.

After its reorganisation the gallery changed direction sharply. It began to concentrate on contemporary art and to try to give its activities an international dimension. From 1991 to 1994 it held a famous series of exhibitions known as Grey Bricks, where the work of living artists was presented and were unique at the time. Every year the Grey Brick had a different aim, the most outstanding was the last one, where the work of artists-in-exile was presented. It was the first and, so far, the only attempt to map this phenomenon. Since the first half of the 90s the exhibitions have also been held in a monumental granary building at Klenová, which was adapted to an alternative exhibition space. 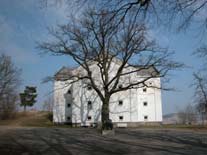 Gradually, it started to host different student activities. Every year two events are held here - in the first half of the year it is an exhibition from the international symposium of art academies Contacts, in the second half an exhibition of the best graduates from the Czech art schools START POINT PRIZE. In 2000 the gallery started to use a new logo which for the first time bears the official name of the gallery. Throughout the 90s, two logos were used: the original one with a peacock for Klenová and the second with a silhouette of a unicorn for Klatovy. The publications of the gallery are notable for the high quality of their typographic design and production

galerieklatovy.klenova
Thank you for your support!

Information about castle or Chateau