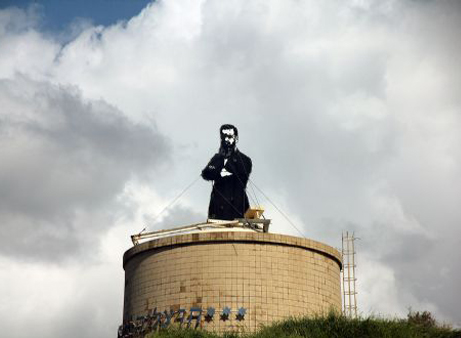 Five years after his exhibition of 50 images of Israel, Jan Sekal presents a new set of photographs on the same subject. The Promised Land consists of 12 sections of ten photographs each, taken in Israel in 2004–2012. The series, which is divided by subject or location, presents an often-surprising look at this country and its people. Sekal has a liking for certain objects and themes (such as windows and ladders). Some of the photographs have been exhibited independently, while others appear here for the first time. One motif that has not been previously exhibited is the graffiti that Sekal encountered on his explorations of the urban landscape; another new subject are battered old shop-window mannequins, most of them quite un-modern, that draw in customers with their faded charm. However, most of Sekal's photographs from this series focus on the urban landscape, on roads and cement structures whose modernity is often worn and faded as well.
Sekal's Israel is not preserved in time, but is timeless. Above all, it is a country like nearly any other. And like anywhere else (France, Slovakia, the Czech Republic...), here too Sekal focuses on the geometry of the city, on posters, billboards and signs interwoven with everyday banality. His eyes capture things that others fail to notice, revealing the faded charm of various out-of-the-way corners in a kind of urban poetry. What is more, many of his photographs have a colour and flavour that reminds us that they were taken in Tel Aviv, Haifa, or Jerusalem. Besides urban landscapes, which remain the central focus of Sekal's artistic interest, we also see images from the Negev and the fresh spring greenery of the natural landscape of Galilee. Human figures, though often only presented discreetly or indirectly, are present more frequently in these works than is usual for Sekal. They are portraits made straight from life, simple and spontaneous.
Sekal does not try to ingratiate himself with the viewer with attractive images; each scene is a question that offers a picture of the place and people objectively and with understanding.
In 2006, Jan Sekal exhibited 12 photographs from The Promised Land at Prague's Gregor Samsa café/bookshop. He now presents 120 images showing his personal vision of Israel, full of nuances, a country known and unknown, surprising and banal, close and distant.
The exhibition is being held in memory of journalist Jiří Slavíček (11 September 1943 – 4 March 2011), without him it may never have been realized.
Exhibition curators: Helena Fenclová and Anne-Sophie Kovács